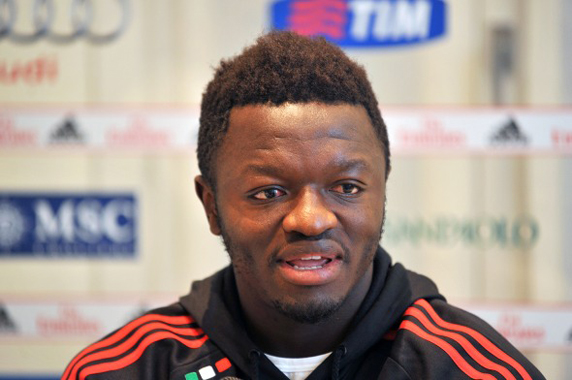 Muntari knows he has done a silly thing, playing with his friends during his holiday in Ghana. He has ruptured his cruciate ligament in his left knee. But to be in debt with AC Milan is leading him to use all his will power to come back. He ensures it won’t be necessary to wait until 2013 to see him on the field. Here, now, with us, he gets a few things off his chest…

Q: Muntari, when will we see you again?
A: Soon! I had crutches for one week, doctors and physical therapists have advised me to proceed calmly. I’m sure I’ll be back before 2013, firstly, because the ligament was not completely broken and secondly because I’m working hard every day. Also with the help of my teammates’ encouragement I am making extraordinary progress.

Q: How did it come to your mind to play with your friends?
A: I’ve always played football with my friends, but instead of having muscle strain, I had an injury to my ligament. It won’t happen again and I like to stay positive about the situation.

Q: Was Galliani angry?
A: Yes, he was furious. But he was right. I have one more reason to be back soon and fit. In this case, I hope he will forget and I have promised him I will make him happy again by coming back even stronger than before. It happened but it won’t happen again.

Q: For this kind of injury, usually a break of six months is needed in order to recover.
A: Six months?! No I will be back in 2012 for sure. You’ll see.

Q: Allegri had already chosen a position for you: in front of the defensive line. D you think he should have put you in Van Bommel’s position?
A: I have always loved playing that position but I’m available to play other positions and I don’t know if I would have been the new Van Bommel! I think Ambrosini performed well in that position and he has experience. But if the coach wants me to play there I will, of course I will. I played in that position when I was at Udinese and a couple of times when I first started out with AC Milan.

Q: What’s the atmosphere at Milanello, after the departure of Ibra and Thiago?
A: They were very important players and it won’t be easy to replace them. Braida and Galliani know what to do and they have the experience to do it. I have no doubt about it, AC Milan will always be AC Milan, even without Ibra and Thiago. We will be at the top again.

Q: Why so optimistic?
A: It’s evident from the past. Without Shevchenko and Kaka, AC Milan remained AC Milan. Very important champions left, but it was planned and we were ready.

Q: Who will be the next leader at AC Milan? Probably someone like Cassano?
A: No Antonio doesn’t have to replace Ibra. Antonio is already a leader and he is not alone. We have Cassano, Pato, Robinho. Not just one person, but the whole team will replace Thiago and Ibra as everyone has to step up for the team. Having a leader is not important, we must work as a team. When we work as a team, everyone is a leader.

Q: Like the Juventus of the past year?
A: Yes, they had a fantastic organisation. They were a strong united team. I think they had their own problems too, but you couldn’t tell that from the way they played! They ran everywhere and I think the coach Conte did a great job and everybody was ready to help their teammates.

Q: Do you think it wise to use the assistant referee’s position behind the goal line?
A: It is a wise decision and one that will help avoid mistakes in the future. I’m happy about this decision.

Q: Does Galliani have that picture on his mobile phone?
A: No, I think he deleted it

Q: You know that you could have hit the ball back into the net rather than turning around to celebrate your goal?
A: I know, but I saw the ball was inside and Buffon saw it clearly too.

Q: What do you think about Buffon not noticing anything?
A: I don’t have idols in football but I have always thought that Buffon was fair. I know the ball was in. He knows the ball was in. Playing football under the pressure on the game, you may fall to the ground and cause drama, it happens to everybody.

Q: Have a lot of your ex-teammates have complained about Allegri, like Gattuso?
A: I didn’t see all this ‘fire’ last year. Everyone speaks and jokes with the coach. Of course when we work there is a different atmosphere but it has to be different. When I picture it in my head, all I can see is Robinho joking with the coach.

Q: Does Cassano joke?
A: Cassano is the king of jokes.

Q: Isla and Asamoah joined Juventus. Why do those who leave Udinese have a regression in their performance? Felipe and Sanchez are the latest two examples….
A: Of course I can’t tell you what’ll happen with Isla and Asamoah. What I can say is that at Udinese, the city and the people help you, the city is quiet and you don’t feel under pressure. Without forgetting the Pozzo family who know how to select the right coaches to make talented players grow and improve.

Q: Is Juventus stronger?
A: Yes, it is strong. But the Champions League takes up a lot of energy.